Please enjoy this invitation into the sound world of Vienna Nocturne!

1. Ch’io mi scordi di te? Mozart wrote this concert aria for Anna Storace’s farewell recital, and included for himself an obbligato piano part (featured solo), making it something like a hybrid between an opera aria and a piano concerto. The vocal and piano lines play and communicate in supportive and intertwining dialogue:

2. Exultate, jubilate. This solo cantata was written by a teenage Mozart for the castrato soprano Venanzio Rauzzini, who later became Anna Storace’s voice teacher. It demands strong vocal technique and stamina, and in the Alleluia section at the end, you can hear the impressive “fioratura,” fast runs of notes strung together on a single syllable:

3. Cinque…dieci…. Much of Vienna Nocturne takes place around the production of The Marriage of Figaro. Below is the famous opening scene in which Figaro measures out the space for a bed, while Susanna admires the wedding cap she’s made for herself. By the end of this duet she has taught Figaro to sing her music. Anna and Benucci sang this together.

4. Se vuol ballare is a seething, mocking aria, originally sung by Benucci, in which Figaro imagines how he could teach the Count to dance to his tune. The form of the aria is a courtly, aristocratic dance, a minuet, but the underlying sentiment is aggressive and confrontational. The text and the musical setting thus work together to create a commentary on 18th-century class conflict.

5. Mozart wrote beautifully for women’s voices, and one of the finest examples of this is the duet Sull’aria, for the Countess and Susanna. You might recognize this from The Shawshank Redemption:

6. Aprite, presto, aprite, another duet for women’s voices, is breathless and comic, as Susanna and Cherubino try to figure out how to extricate themselves from a pickle. Blink and you’ll miss it!

7. The finale of Act II of The Marriage of Figaro is a masterpiece. What Mozart accomplished here, interlocking different sections into a seamless whole, was unusually complex for his time. This is the second half:

8. Some of the wonderful solos sung by the Countess (Luisa Laschi), the Count (Stefano Mandini), and Susanna (Anna Storace):

9. The second opera Mozart wrote with Da Ponte was a dark comic opera, Don Giovanni. Some of the original Figaro cast members performed in it, and if Anna had been able to return to Vienna, she would probably have sung the role of Zerlina, the peasant girl whom Don Giovanni seduces in the  famous duet La ci darem la mano:

10. Abendempfindung an Laura seems a remarkably modern song to me in terms of its text and compositional style. It is through-composed, which means that it plays out from beginning to end without repetition. The text is clear-eyed and honest meditation on impermanence, friendship, love and death.

11. “Ruhe sanft” is an example of one of Mozart’s German arias and has a beautiful melody. It is from an early, unfinished Singspiel, a German-language opera with spoken dialogue. You might imagine Aloysia Lange singing an aria like this.

12. Mozart was a renowned player and teacher. One excerpt that I relied on particularly while working on the novel, and when imagining Mozart’s character, is the exquisitely beautiful Adagio from Piano Concerto No. 23. By turns it is melancholy, cheerful, and passionate, and a great deal happens in the space of a few minutes. The ending gets me every time.

13. Mozart enjoyed playing both violin and viola, and you might also imagine Anna’s husband John Fisher playing the violin in this style.

14. I have performed in Mozart’s Requiem both as a chorister and as a soloist and it never ceases to move me.

I hope this gives you a taste of the music of eighteenth-century Vienna! 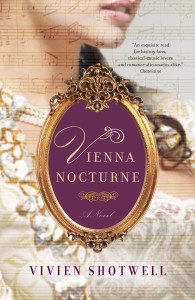